If it’s a numbers game, where’s the numbers? Where’s the DNA?

With BSL, oozing over many cities like an open sore, I have to ask where are the facts to support it?  Do residents of these cities really want truthful info from an educated point of view, for legislation that works for everyone, or for it to be manipulated and simply forced upon us by our city council members like a plague, out of ignorance? Are these Councils fear mongering to further their own agendas?

Or is it what I have always suspected a cash grab? Do they have facts and case reports to back it up? Or nothing but rumours and unsubstantiated claims or assumptions of guilt!

Case and point I have a close personal friend who has a pit bull, he is required to muzzle her when he goes out. A few short months ago a Lab mix ran out crossing the street to get into the park they were in and went straight for his dog, while my friend scuffled with the (Lab), his dogs muzzle came off, the Lab broke free and attacked his pit bull, and she in turn fought back, in an effort to get to her feet.

The Labs owner phoned Animal Control, or the SPCA who wanted to confiscate my friends dog, until his neighbour (thank you neighbour!) stepped up, who by the way was at the park that day, walking his dog as well. He told animal control that it was the Lab that attacked first, and with the most aggression.

Now I think we all know in our hearts that if not for that neighbour, his dog would be on death row or dead now. In Richmond, BC Canada on January 10th 2011 at the City Council meeting where “BSL” and a “possible repeal or amendment for fair legislation” was requested by HugABull Rescue & Advocacy, the Council flat-out told them that not only would they not consider any amendments or repeals, they went so far as to say if they did revisit it, the council would most likely they ban “pit bulls” altogether!

I felt that HugABull failed in their attempt, I felt that they were not prepared, and went in flying by the seat of their pants and did not do their homework. I knew more than they did, not good for an advocacy group. (I want to say that I have the highest respect for HugABull, and all they have done for our dogs) but, they never said whether they requested info from the city on attack stats. In fact they didn’t say a lot of things! In their defense every interaction with any city council is a lesson, one must learn how to navigate those shark infested waters sometime, and I guess for HugABull they dipped their toes in Richmond’s pool, and Kudos to them for taking the steps that no one else would!

Sadly for the cause, they didn’t touch on any points about the fact that there is zero tangible evidence to support a breed specific legislation, but none the less, to me, that sounded like a “Shut Up and Go Away Quietly or Else!” Thanks for that Mayor Brodie, thanks for sounding like such an idiot on TV, makes our little city look a little less than appealing to people with common sense and a strong character. Two things you consistently fail to demonstrate. I am also very confident that I was not alone in that interpretation.

So where is their documentation to support what a huge problem pit bulls are or were in terms of safety to this, or any community? The answer… They have none! Oh right…, I forgot they don’t need it! They can say or do whatever they want and we have to learn to live with it!

They can abuse the power bestowed on them by their constituents and if we don’t like it well…. sucks to be us I guess! That sounds like a dictatorship to me, not a “Council”  They can say there were attacks, and yes there were, But NOT all were pit bull, other breeds were a party to those stats. Only two were “pit bull” That I found out from the editor of our Local newspaper as The City Council wanted to charge me almost $3000.00 to get info on exactly which breeds were involved in said “attacks” now call my crazy but since they want to charge me over $200.00 to license my dog, I think they should be obligated to show me why!

They want to hammer on the fact that there have been pit bull attacks, (um okay I’ll take a politicians word for it then.)  Keep in mind these determinations of breed were made by a visual assessment only, there was Zero DNA done on those dogs. And one was more a case of bad ownership than it was aggression from the dog, so again, I say where’s proof? I don’t blindly believe anything I am told by a politician or anyone else for that matter. I want the proof! And I want the truth, something I am sure Richmond City Council would have a hard time with. Assuming they know truth anymore.

You can’t get statistics on pit bull euthanizations (in Canada and the USA) due to aggression or attacks, and why? They don’t exist! RAPS (Richmond Animal Protection Society),  Shelters, and the SPCA do not keep records on that, only the total number of dog euthanizations per year. Hmmmmm! Sounds like there’s a trend here, we want to ban them, but won’t invest in proving what the problem really is, we’ll just let the media take the lead and call it a “Pit Bull Problem.”

If we fear it we can legislate it out of existence, if we can make our citizens fear them, then we wont have to focus on making people accountable, and the ignorant, the Sheeple will support the legislation!

Bob’s Your Uncle, we can make a buck or $200.00 off those that can’t be led like sheep or intimidated. It can be made off those who will stand by their breed of choice at any cost!

Our Mayor, Mr. Malcolm Brodie said that there were several attacks in Richmond prior to the ban, as I stated in my earlier post about BSL in Richmond, let me just say this again, with the way the Media just loves a pit bull attack story, I find it hard to believe there was a significant problem, more like a council member that had a run in with a irresponsibly cared for pit bull, and why you ask?

Well, because over a ten-year period (unless I lived under a rock), would I not have heard about several, I only ever heard about one!So where’s the numbers and the proof? I need to see it on paper, otherwise as far as I am concerned we are in a dictatorship not a democracy. If as Mayor Brodie states  and I quote “Most of the residents of Richmond wanted BSL.” Where’s the proof? Where’s all those elusive numbers? I’ll tell you they don’t exist either, the only thing that exists is a council that abuses the trust we placed in them, a council that uses their positions to further their own agendas!

I know from personal experience, being a resident of the town for 26 of the 28 years I have lived in the Lower Mainland, that Richmond has always been a pretty liberal dog town, so I could be wrong but I can’t see the majority of residents asking for BSL, some maybe, but not most! I wanted this town to wake up and see the light, but it has always been a town full of “holier than thou” Farmers and Yuppies, now it’s a town filled with people who do not know the laws, nor do they care! They do not follow any of the laws set out by this city, so I can’t imagine they would be all that upset by a pit bull ban, sad but true! In fact most of the people here do not speak or read the language fluently, they expect their children to be their interpreters, so I guess I am a bit skeptical that in light of that, they can make educated and informed decisions 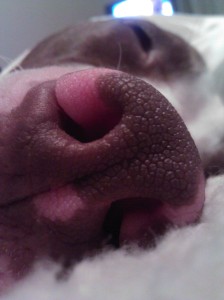 about a breed ban

It is now up to us the few it bull owners left to start this year off right, to start it off by making changes that benefit all the citizens of Richmond, and cities everywhere, BSL concerns everyone across the board and across the globe, and we all need to stick together if we truly want that change. we need Bylaws that are fair, and just, ones that are not discriminatory or based on appearances.