It another Patrick…, What exactly is wrong with the world?

I am feeling that I hate people vibe again!

Here we go again making the perp the victim!

Kisha Cutis’s mother was on action 12 news talking about how her daughter is being made in a villain and how Kisha was out-of-town when Patrick was dropped down the 22 floor garbage chute. Well I don’t know about you, but I am really sick and tired of the criminals being made into the victims! Her mother spoke about how Kisha is a good person!

Patrick’s conditioning could only have been that severe after weeks of being denied nourishment, and anyone with any common sense can ascertain that much! As it stands now Kisha is in county lock up on a separate shop lifting charge, which speaks volumes right there as to the Character of this sub-human!

I do not know of many women let alone mothers who could sit by for weeks watching a “puppy” slowly starve to death, in fact I don’t know of many men that could do that either! She claims she could not afford the puppy, COME ON! that is one of the lamest excuses I have ever heard! There are shelters everywhere! In a shelter Patrick would have at least been given food and water so that one is far from cutting the mustard for me personally!

This is yet another case of abuse, plain and simple! This monster enjoyed watching Patrick suffer or she would have done something, anything to get him help! Patrick is the poster dog for why animal abuse can no longer be tolerated, animal abuse has gone more or less unchecked, the ASPCA, HSUS and the SPCA, do take on many cases but the laws are the main problem. Sub-humans  like Kisha are allowed to do these things and pay little or no consequences for their acts of abuse or neglect.

Please look at Kisha and Patrick’s pictures and never forget it! let be a beacon for change! Let his case be the case that changes the face of animal abuse and neglect laws forever. If we learn nothing, change nothing after this, then we as a society are truly morally bankrupt! 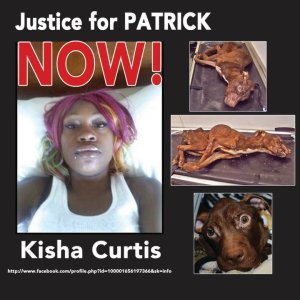 Personally I like to think that we as a species are capable of creating such laws that protect animals from these types of abuses from today forward! Abuse is abuse, murder is murder whether the act is perpetuated against a human or not! Life is life and all creatures have the right to a life free from abuse and neglect, Yes even those we raise as food!

Help get the word out, please visit this site and share!

It’s your time to make a difference!

Time for some inspiration, never focus on what you can’t do, only what you can! Go Ricochet!

If we stopped everytime someone said you can’t, we’d never change anything, never touch a life, or save a soul!

He is an inspiration!

Anyone want some dog training insipration?

Please help support change everywhere, it’s not just one country’s problem, it’s a world problem. But it doesn’t have to be!

Thank you to everyone who puts animal rights on their  list of to do’s!

Your four-legged friends thank you, and so do I.