I have a Facebook page, a Twitter page, a Youtube account, and this blog and I have many rescues and shelters on my friends lists, and followers who often the post their “Urgent dogs” and I have to say that my stomach does flips every time I get a visual that this problem is not getting any smaller. that so many dogs and cats have no homes! Now maybe it is reducing on some level, but the number of faces just seems to increase. Face after face after face, all just wanting a home to call their own. A home with someone who will never let them know hunger again, or hurt, or cold, or fear, or that horrible feeling of being unloved!

I have finally (Duh!) come to the realization that the problem was never with too many animals at all, I think it was and is with too many ridiculously stupid and heartless people! We are the problem folks! For some reason, we the humans, the opposable thumb holders and the ones with the bigger brain, (remember bigger does not always mean better!) we just can’t wrap our heads around the fact that we need to protect animals from abuse and neglect the same way we would a child or ourselves, and there should be an equal punishment. We just can’t seem to get it together, and in the mean time animals suffer, they are bred, they are born, they are abused and they are left to die, alone.

People have this ridiculous notion that if an animal is at a shelter there must be something fundamentally wrong with them, how blind we can be? I mean, helloooo!!!!! that’s like saying every single kid in foster care is a nightmare and unworthy of love and safety. Come on! Regulations and responsibility need to be placed on owners, but the right kind, not more BS legislation, something that will work and end the trend of the unwanted! If you are not a breeder, your dog should have to be spayed or neutered, and it should be harder to become a licensed breeder!

I don’t know, I look at 85 percent of the population and I swear to you based on behaviour alone, I wanna slap the crap out of these people! I wanna shake them so hard they barf! I want to kick them in the can…HARD!  All the while screaming “You stupid, stupid bastard, grow up, pull up your man pants, and girly slacks and act like an adult!”  Have compassion and be responsible or suffer the consequences! People that dump or surrender You really don’t want to know what I think of you, and what I think should be done to you, trust me!

I am the type of person who will say exactly what I think, sometimes it’s not politically correct so to speak, sometimes its things people just don’t want to hear. There are times when I am wrong, and times when I hit the nail dead center! Sadly when it comes to our own stupidity, selfishness, and total self-centered attitudes, I am right on the money!  With the things I have seen, heard and read, I get a bit jaded and think that we are truly a pathetic example of a species, and sometimes I’m right, we are! I think without us these dogs would have been fine, mother nature would have kept the balance, I think we are probably the worst thing to ever have happened to this planet, and as a species I think we were a colossal…. FAIL!

We blame these dogs for their plight, and we say things like “Awe that’s too bad that 170 000 animals were euthanized last year because of lack of homes, and that’s nonsense! In fact it’s total BS! There are more than enough homes for every shelter dog out there, we are just too stupid to see how great they are, how much potential is just waiting for a chance to shine, instead of a one year old dog “we” want that cute little puppy! Why? Because we are…. wait for it….. IDIOTS! we not the “Hot stuff!” in reality humans are more like a cold turd rolling down a warm hill! We just turn off the news or the radio, we don’t watch the ads on TV we change the channel, because if we didn’t we would have to face what we have done and what we have allowed to be done!

The unwanted sit, and wait, and die while we just don’t get it together! We don’t grow, we don’t move forward, we stagnate, think about the world around you right now at this moment, do you like what you see? are you happy with it? are you really going to say that you are ok with that many animals being nuked and thrown in the dump, piled on each other like some concentration camp? 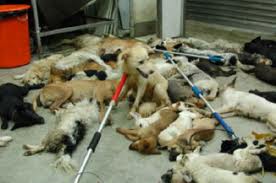 Many people work very diligently to change that, day in and day out, and to you, WOW! Do you ever have my respect!  It must feel like ice skating uphill some days. I guess I would just like to see people wake up, get passionate, and do something to better the world we brought these animals into, we domesticated them, we took them from the hunter, the carnivore, and made them the companion, the friend and made them sit at our feet.  Based on what we have done, maybe we should be sitting at theirs, because I know that no dog would throw a human off a bridge or onto a hot  BBQ  just to see pain! No dog would take a cookie cutter to a humans backside just for the “fun” of it, and no dog would walk away from his pack member like they we nothing! They would never leave one of their own behind, hungry and alone to face the unknown! Maybe we should be…….