When The President Sides With A Dog Killer: Interesting, it must be nice to be so blinded by the sports cash cow, or is Mr. Lurie a personal friend?

So apparently Obama thanked the Eagles owner Jeffrey Lurie for giving Michael Vick another chance, now what just astonishes me is that somehow the President has forgotten that this was more than just a dog fighting case, its more than celebrities breaking laws and then lying about it to avoid punishment.

What it is really about is how as a society we can look the other way when its animals involved. Would Mr. Obama be quite so forgiving if it were a child killer they had taken under their mighty wing? I highly doubt it. Would he be endorsing forgiveness if it were a rapist who had done time, and then gone running back to the league?  I say No!

You see when you think of Mr. Vick, the league wants this image to come to mind;

A soft-spoken clean-cut young man ready to “get er done” for his team. What they are so desperately trying to steer away from the public consciousness and memory is the true image of what that “thing” really is, and what “it” is, is a dog killer without a shread of humanity, compassion or the capacity for any real change.

So I will give you a little media overload of my own, can you see a truth there or an attempt to cover up? 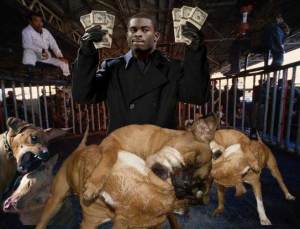 So the next time you hear the President congratulating a football team’s owner for giving second chances, maybe we should ask the President to congratulate all the various organizations, rescues, individuals, who donated countless dollars and hours to saving and giving the dogs he habitually abused, neglected, and tortured, a pat on the back for giving those dogs a second chance, not at a useless career, but at life itself! I think their contribution far outweighs anything that Mr. Lurie did, don’t you?

Obama I don’t know who co-ordinates your speeches and media blurbs but brother, you gotta fire that dude! what a stupid and pointless statement to make, Or do you forget that in 2008 when asked what you thought of Michael Vick you said and I quote “He’s an ass!” I guess this is living color proof of the kind of corruption, and money that goes into the sports arena! I say bull shit! and enough! I am sick of watching this turd gobbler made into a victim! I’m sick of the president, a man who is supposed to embody the very best of society, open his mouth without thinking what the repercussion of that would be, and spewing out bile!

I think its time for Obama to take a nap, the stress is starting to show. 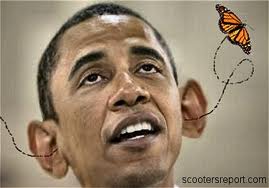 I am a mother, a pit bull advocate, but mostly I am just like any of you, I am passionate about politics, the environment and dog advocacy. I want possitive changes within the judicial system as well. I want my children to grow up in a country where we are not told what breed of dog we can own. I want to see BSL put in the trash where it belongs! I want to see the constitution protected but not manipulated *see anything on the mosque near ground zero (USA) or changing Merry Christmas to Happy Holidays (Canada)* I am not racist in any way shape or form against any ethnic group, I do however have prejudices against bad behavior! If you abuse our laws, kids, the elderly, or animals, If you move to a new country and then demand that country to change everything about it's laws & way of life to suit your own agenda, If you blatantly break those laws with no regard and show no repect for them, if you engage in dog fighting or any other forms of animal abuse, torture or neglect, or if you are a pedophile, Than yes! You are on my radar for sure, and I will do EVERYTHING within my power to see you stopped and brought to justice! Furthering that goal, I have no qualms about publishing the names and faces of convicted abusers. I am not trying to change the world, I simply want to see things improve not backslide, Mostly for my children and these wonderful dogs futures! I may say things you agree with, and I may say things that you won't agree with, I may anger you, challenge you, or just plain piss you off, but in my book that's ok as long as long as it inspires some form of action on your part. This is not a popularity contest, If I have said anything about a group or person that you don't agree with please feel free to leave a comment or simply don't come back. If You have been mentioned in my blog it is for one of two reasons, you are either an advocate or you are an abuser loser, if you are the latter I could care less what you think! I value the opinions of trash about as much as I do that of a slug! Everything in print here is a matter of public record, or came from a trusted source, with that said, I am certainly willing to print both sides of any story, in an effort to be fair and always print the truth! END_OF_DOCUMENT_TOKEN_TO_BE_REPLACED
This entry was posted on Wednesday, December 29th, 2010 at 9:11 pm You can follow any responses to this entry through the RSS 2.0 feed.
« In light of news that Michael Vick wants to get another dog, for his (AHEM!) rehabilitation……
What’s next for pit bulls? What future do you see? »