Do you like a good data chart? How about some comedy on the side?

Here’s just a few I came across, which seem to contradict the vicious pit bull theory; 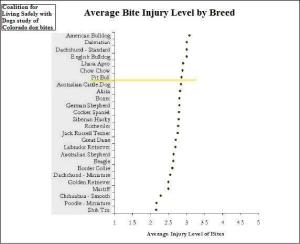 Now you don’t need to be a statistician to clearly see that pit bulls represent a very small percentage of dog bites, so this tells me there is definitely a bigger agenda at work when it comes to BSL and breed bans.

For the comic relief portion of the day: When I envision a conversations between city council members in Denver, I see it going a little something like this;

Can you guess who the Mushroom is?

Just who is Alan Beck anyway, and is he really that expert?

Alan Beck, director for the Center for the Human Animal Bond at Purdue University School of Veterinary Medicine, West Lafayette, IN.

sounds pretty impressive  doesn’t it, well based on what I have researched about him, he not a shrink, he lists animal behaviorist on his credentials, well I’m not so sure, sorry Alan but many of your peers and colleagues say the exact opposite about Pit bulls. What am I referring to, well I am referring to this statement he made;

“Pit bulls are different; they’re like wild animals,” says Alan Beck, director for the Center for the Human Animal Bond at Purdue University School of Veterinary Medicine, West Lafayette, IN. “They’re not suited for an urban environment. I believe we should open our eyes and take a realistic approach to pit bulls.”

It seems to me that we have a new sect of individuals that want to jump on the Pit Bull vilification band wagon, and the money train that it brings with it! It is exceptionally rare for an “animal expert” to condemn a pit. Now I am not denouncing his credentials, however I do condemn his motives, and the damaging effects that a statement like that can create.

How can so many Vets be wrong in saying that “It is never a dog problem, it’s a people problem.”  Then you have people like Tia Torres of the Villalobos Rescue Center, you have Ceasar Millan, Brandon Bond,  Danny and Debbie Trejo,  and Brad Patterson, these are all people that have worked with and or owned pit bulls for many, many years and that’s not what they have to say at all!  In fact many Vets will tell you Chihuahua’s, Labs, Retrievers, Dalmatians and German Shepherds will bite you before a pit bull will, as I have said many times anything with teeth can bite, even humans!

Again I will say that as damaging as the statement he made sounds it has absolutely zero merit. This new wave of making money off of creating a bad reputation for the Pit Bull must end. I have seen and heard enough! When someone wants to speak the truth I am more than willing to listen. However more lies just to hock your book? Alan! Please!

Think about it this way, would millions of Americans go running out to buy “The Happy Pit Bull” or would they dash right out to pick up another tale of  “Pit Bulls attack!”  I think you already know the answer to that one. Sad but true, don’t forget, we like our gore now don’t we? I am not going to debate this one, I posted this to show you the truth about what people will do to make a name for themselves and or sell a book.  As a Veterinarian and director of an animal human realtions department at a college, he and the college should be more than a little embarrassed right now, but since the so-called “Data” has NOT been published as of yet we will have to wait with bated breath on this one!