So there really are angels! Anna’s story of a poor little dog that needs our help! 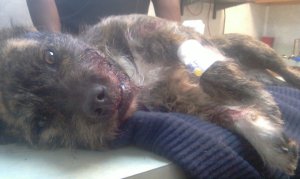 I was driving home after picking up my son & boyfriend from the bus depot in Allentown on Hamilton Ave. When reaching Martin Luther King Blvd intersection – I saw a little dog running in the street – immediately SLAMMING on my brakes & all of us jumping out into traffic to help this dog. I almost got hit by a car myself – trying to get the car to stop before it hit the dog… dog was “bumped” by the tire but managed to escape – my son & boyfriend went after it & I jumped back in my truck to catch up & manage moving traffic. We lost each other for a few minutes & then I spotted my son. As soon as I jumped out of my truck, my cell phone rang – it was my son. I saw them down the block by curb & already knew… my son’s words were “Mommy – it’s a wrap”… I asked if the dog was hit & he sais “yes & the guy did it on purpose”. He went on to explain that every car stopped because the dog was in the street & there was another good samaritan that was directing (stopping) traffic but this guy just kept on going where all the other cars had stopped. The good samaritan stopping traffic was a Parole Agent in the Allentown District of PA. I found out a few minutes later that a Detective stopped & ran over when my son & boyfriend were trying to help the dog immediately after being hit, flashing his shiny gold badge & all – but when he realized it was “only a dog” responded by stating “oh that’s all”? & going on his merry way.

The poor dog was dragged a good 15 feet before the guy stopped & that was only because my son & boyfriend were chasing after him & yelling.

I rushed the dog to the nearest vet, praying that she wouldn’t die before we got help & begging her to hold on… she had a collar but no tags or microchip. She is pretty banged up & we have her stabilized at this point. I’m waiting to hear the results of the xrays as the vet stated that the priority is to stabilize her & keep her comfortable. The hospital is aware that I am not the owner – just trying to do the right thing. Have searched CraigsList for a lost dog matching her description. Again – she needs our help… & will need a home if she has the strength to pull through, everyone is pulling for this girl… I feel blessed that the vet is willing to “work with me” but need your help & support to cover these medical costs.

If you would like to send funds directly or call & check on her — she listed as F-DogHitByCar MLKBLVD in their computer systems. Hospital contact:

Big thanks to Anna and her family, what a rescue! you are all her angels, I’m sure!

I am a mother, a pit bull advocate, but mostly I am just like any of you, I am passionate about politics, the environment and dog advocacy. I want possitive changes within the judicial system as well. I want my children to grow up in a country where we are not told what breed of dog we can own. I want to see BSL put in the trash where it belongs! I want to see the constitution protected but not manipulated *see anything on the mosque near ground zero (USA) or changing Merry Christmas to Happy Holidays (Canada)* I am not racist in any way shape or form against any ethnic group, I do however have prejudices against bad behavior! If you abuse our laws, kids, the elderly, or animals, If you move to a new country and then demand that country to change everything about it's laws & way of life to suit your own agenda, If you blatantly break those laws with no regard and show no repect for them, if you engage in dog fighting or any other forms of animal abuse, torture or neglect, or if you are a pedophile, Than yes! You are on my radar for sure, and I will do EVERYTHING within my power to see you stopped and brought to justice! Furthering that goal, I have no qualms about publishing the names and faces of convicted abusers. I am not trying to change the world, I simply want to see things improve not backslide, Mostly for my children and these wonderful dogs futures! I may say things you agree with, and I may say things that you won't agree with, I may anger you, challenge you, or just plain piss you off, but in my book that's ok as long as long as it inspires some form of action on your part. This is not a popularity contest, If I have said anything about a group or person that you don't agree with please feel free to leave a comment or simply don't come back. If You have been mentioned in my blog it is for one of two reasons, you are either an advocate or you are an abuser loser, if you are the latter I could care less what you think! I value the opinions of trash about as much as I do that of a slug! Everything in print here is a matter of public record, or came from a trusted source, with that said, I am certainly willing to print both sides of any story, in an effort to be fair and always print the truth! END_OF_DOCUMENT_TOKEN_TO_BE_REPLACED
This entry was posted on Wednesday, December 1st, 2010 at 2:28 am You can follow any responses to this entry through the RSS 2.0 feed.
« Just a wee babe in need! To find out more see raven woods rescue on facebook!
Stories like this must really piss of the haters! »

One response to “So there really are angels! Anna’s story of a poor little dog that needs our help!”