“Some people wonder, are we ever going to let Michael Vick get beyond all this?”

for all those who say are we ever going to let him get beyond it? Maybe you should read this article by Los Angels Times reporter  Bill Plaschke.

Then tell me what you think, if you still think the answer is “Yes”, than society is more corrupt than I thought, its more focused on the almighty dollars that sports figures bring then the adherence of laws, animal rights, and abuse.

I don’t know about anyone else but I am sick to death of hearing how this has negatively effected Michael Vick’s life and career. Frankly I could care less! As I have said in earlier posts being in the NFL or any other league for that matter is a privilege not a right, and the blatant spit in the face he gave the league for all that it had done for him sickens me to the highest degree!

I look at these dogs and see how the horrific things that were done to them still affect them to this day, and I really don’t feel any sympathy for Mr. Vick  in fact the only feelings I get for him are those of contempt and disgust. Will this mark stain him forever? Only fate can decide that, but it should, or at least it should not be forgotten or swept under the rug like it did not exist at all.

Myself I can not even begin to imagine how money can drive someone to allow themselves to participate in activities such as the ones that Michael Vick was involved in, I recently had a friend say “But he grew up in the ghetto and he was poor and you did not”, well let me just share this, I grew up the second child of a single mother, my brother and I had to be latch key kids so my mom could work full time to support us, we at one time received food and clothes from the food bank and church donations, we had christmas’ where we had to make gifts for each other because we couldn’t afford to buy them, we had years where we had to wear the same clothes or shoes the on following school year etc.

Now it may not have been the exact same experiences as the poor hard done by Mr. Vick, but I never broke the law, I never hurt animals for profit and I never tortured or abused anyone or anthing because of it. There are millions of people who grew up dis advantaged or poor, who never engaged in this, so you will have to forgive me if I think that statement is a little unfair, and a lot of BS! Its a very weak excuse, plain and simple, and not even close to cutting the mustard as far as I am concerned.

So for those who say “Are we ever going to let him get beyond all this?”  I can only say ” I HOPE NOT!” and never lose sight of what he really did. 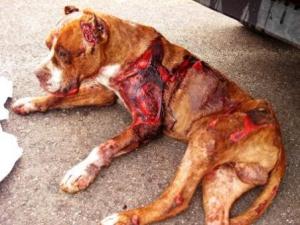 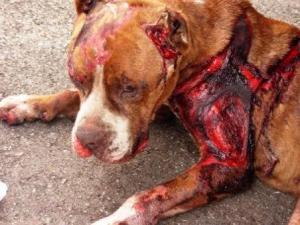 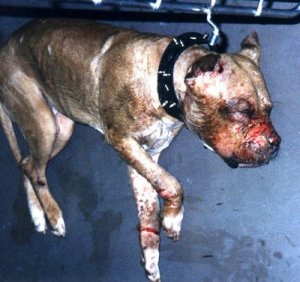 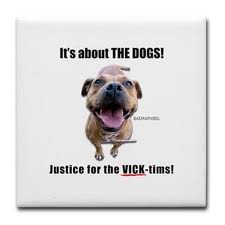 You be the judge!

I am a mother, a pit bull advocate, but mostly I am just like any of you, I am passionate about politics, the environment and dog advocacy. I want possitive changes within the judicial system as well. I want my children to grow up in a country where we are not told what breed of dog we can own. I want to see BSL put in the trash where it belongs! I want to see the constitution protected but not manipulated *see anything on the mosque near ground zero (USA) or changing Merry Christmas to Happy Holidays (Canada)* I am not racist in any way shape or form against any ethnic group, I do however have prejudices against bad behavior! If you abuse our laws, kids, the elderly, or animals, If you move to a new country and then demand that country to change everything about it's laws & way of life to suit your own agenda, If you blatantly break those laws with no regard and show no repect for them, if you engage in dog fighting or any other forms of animal abuse, torture or neglect, or if you are a pedophile, Than yes! You are on my radar for sure, and I will do EVERYTHING within my power to see you stopped and brought to justice! Furthering that goal, I have no qualms about publishing the names and faces of convicted abusers. I am not trying to change the world, I simply want to see things improve not backslide, Mostly for my children and these wonderful dogs futures! I may say things you agree with, and I may say things that you won't agree with, I may anger you, challenge you, or just plain piss you off, but in my book that's ok as long as long as it inspires some form of action on your part. This is not a popularity contest, If I have said anything about a group or person that you don't agree with please feel free to leave a comment or simply don't come back. If You have been mentioned in my blog it is for one of two reasons, you are either an advocate or you are an abuser loser, if you are the latter I could care less what you think! I value the opinions of trash about as much as I do that of a slug! Everything in print here is a matter of public record, or came from a trusted source, with that said, I am certainly willing to print both sides of any story, in an effort to be fair and always print the truth! END_OF_DOCUMENT_TOKEN_TO_BE_REPLACED
This entry was posted on Wednesday, November 17th, 2010 at 11:15 pm You can follow any responses to this entry through the RSS 2.0 feed.
« Help Dr. Harrison, he’s gorgeous and he needs a for always home!
A charming little snip it from my neck of the woods, I will never support CBC again! »