According to Dogsbite.org any (they basically state that) any “Pit Bull Owner” is a gang banger, thug, and or otherwise unsavory individual.

Nice slam there “Colleen Lynn”  (not her real name!)  Speaking of unsavory types what would one call a person that silicates “DONATIONS”  to quote  “aid bite victims”, and then not only does not help one single bite victim with medical costs, lawyers, etc. that was not bit by a Pit Bull?  but also won’t publicise dog attacks from other breeds of dogs aside only Pit Bulls?  HHHMMM Colleen?

Case and point the million dollar medical bill one family incurred that made local and national news, You didn’t even post the info about the attack, why? Because it was not a Pit Bull! What would you call someone like that Colleen? would you call them a pillar of society or a parasite?

My vote is parasite! but that just my opinion, and my other opinion is you are a liar! you help get innocent dogs killed and destroy the families that love them, all because you were bitten.

Newsflash, I was bitten by a blue malemute when I was 3 years old, do I blame the dog? Do I hate all malemutes? Do I go on a campaign to rid society of all malemutes just because I had a bad experience with a badly abused and un-socialized dog?

NO!  I do not, but then again I am a rational person, colleen, someone who poseses a lovely little mental talent called logic, not a bitter, vindictive, fraud and a liar!

Dare I say it is safe to assume that you have carried those particular character traits with you since looooong before you were bitten by that dog.

So for public consumption I will share all these:

Sounds like she’s a real upstanding member of society there huh folks?

On behalf of every Pit Bull owner, and future owner I will say this; Do not ever speak as to the character of people you do not know, and whom you would never “Lower” yourself to get to know Ms. Lynn (again not her real name) you are a pathetic example of the human species, you hold every despicable character trait one human can possibly possess and you dare to suggest that every pit bull owner is scum? That’s like saying every African-American is a drug dealer, or every Caucasian is a racist.

You fail miserably at holding your own in any live interview I have ever seen or heard from you, and  you need a team of professional writers to bake up all your nonsense because you are not even smart enough to come up with your own myths and lies. what National Geographic issue are you going to rip this weeks photos from? why not google bear attacks and use those, people will surely buy that!

You are done dear, done like yesterdays news, busted buddy!

Have a great day Colleen and P.S.

This video is a bit long but very informative please watch full video!

HELP!!! Stunning boy Ben was pulled from the euthanasia list by AmsterDog Rescue for a foster/adopter. However, this individual has backed out and Ben has nowhere to go!! He is still in GREAT danger! If you can help, even for short term fostering, please contact AmsterDog Rescue ASAP at (917) 689-8414. This is URGENT! http://animoto.com/play/6p9SN4yal0KTyiN7QSmtEQ

Benjamin (ID #879706)
animoto.com
1 Yr Old on the EUTHANASIA LIST! I am a male brown and white weimaraner and am pit bull ter mix. The shelter thinks I am about 1 year old. ***** Amazing beauty!!!! IRRESISTIBLE!!! TO BE KILLED!

Leave a comment | posted in For The bulls, Help Me

Healthcare and exercise, it’s not just for you!

Did you know that millions of dogs go without healthcare and or exercise every year?  Did you know the effects of this range from obesity and aggression to heart worms and mange?

It is just as important for your dog to be fit and healthy as it is for you, think about it, nobody likes exercising alone, well OK not nobody, but surely we can all agree it’s more fun with a buddy. Why not make your workout buddy your dog.

There are lots of things you can do to stay fit with your pet just look at Brad Pattison and 6 Legs to Fitness, what a great idea!

There are dog parks, trails, the beach, bike ridding, and my personal favorite throw a ball and then chase the dog to get it back, ha ha ha! No matter what you choose to do just get out there and do it! But remember to take a baggie and clean up after your dog, nobody like stepping in grass chocolates, and here’s a tip for those that don’t have pets, it’s not really chocolate! Just be mindful of the fatigue factor, dogs can get overheated and that’s not good, don’t make them keep up with a biathlete!  Always be sure to have lots of water on hand and a collapsible bowl.

Healthcare is just as important, generally its best for your dog to see a Vet once a year but remember with puppies and older dogs they may need a bit more maintenance. Your best friend needs to have check ups, shots, and teeth cleaning, and nail trimming is a must as well, especially for indoor dogs. Love your dog enough to see to them just as if they were your child, after all they are your charge now and need your protection and your love.

So come on! Get out there and have fun! Treat your body and your dog’s lie a temple you will both have many years of fun together. Your dog will thank you, probably with soggy kisses or sneaking into bed with your for a well deserved cuddle! 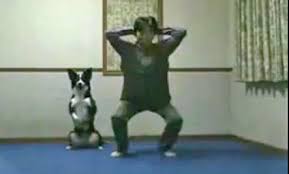 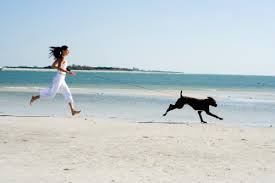 Dog of the day

Todays littlest dog with the biggest heart comes to us from Naoma Cummings, I’m a bit bias here, she’s my mom, her dog Xara well we should have called her Tigger, when she meets you for the first time she bounces so high it looks like she uses her tail! well here she is, and tell me if you think she’s as cute as I do!

Again I am not impartial on this one but if you want your superstar dog show cased then send those photos!

shared from Bruised Not Broken: Update Joker is adopted!

This gorgeous boy found a very loving and forever home!  Joker…. Good luck my boy! my heart melted the moment I set eyes on this young man!
Here’s to you and your new forever family!
thanks to everyone that expressed interest or concern!
Great Big thanks to Bruised Not Broken for allowing me to cross post their links! It’s all about the dogs, but you are one awesome chicklette Brooke!
Thanks
-Apitome-